Tynette has an extensive background in media, having worked as a TV and video producer/director, radio producer, and journal editor and writer. Growing up in the Maritimes, she saw how communities suffered at the hand of big business as well as government. Through media and grassroots organizing, she supports those advocating for environmental, social, and racial justice. She lives in K’jipuktuk (Halifax). With an academic background in marine biology, Gretchen Fitzgerald became Atlantic Chapter Director in 2007 and transitioned to National Programs Director in 2016. She led the campaign to successfully stop oil and gas development in the Gulf of St. Lawrence and secured provincial commitments to ban uranium mining in Nova Scotia. Her passions include her daughter, getting out in the garden, and seeing people use their power to bring about change. Follow her on Twitter @GreenMission Originally from Punjab, India, Oshean studied Graphic Design in Ontario before moving to the Maritimes in 2016. He believes stories help people understand the world around them and he uses his considerable skills in video editing, photography, graphic and web design to help organizations and individuals tell their stories well. He is passionate about climate justice and active in the environmental movement in K’jipuktuk (Halifax) and beyond. Ali is currently doing a Master of Arts in Climate Action Leadership at Royal Roads University and has a Bachelor of Music Therapy from Acadia University. As an Ocean Bridge Ambassador, she helped facilitate projects such as Going Beyond Land Acknowledgements, which included creating an interactive call-to-action map using ArcGIS, and working on a short film on the connection between mental health and climate change. Ali is passionate about creating safe and welcoming spaces for everyone to participate in environmental organizations and their activities. Currently a student at Dalhousie University’s College of Sustainability in the Co-Op program, Alex has a particular interest in renewable energy and energy storage technologies, as well as environmental racism and the impact of colonization on Indigenous peoples and the environment. He is an active member of the Southeastern Community Health Board and has already earned a remarkable number of awards and academic distinctions. 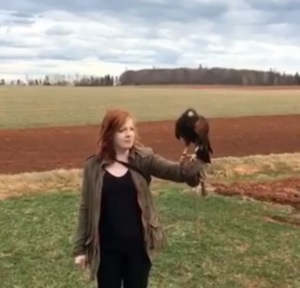 Originally from Prince Edward Island, Deanna moved to Moncton as a child, and returned to the Island several years ago. She has been working in childcare for more than ten years and has a passion for wildlife and spending time in nature, and loves sharing it with the children she works with, as well as her daughter. She is also part of the Fox Club society, which is a scouts type club for adults that involves outdoor adventures, challenging oneself, and learning new skills.

Hannah has a Master of Science in Biology from UPEI and a Bachelor of Science in Biology from Simon Fraser University. Her research interests included frogs, songbirds, fish, and native pollinators. She was a Marine Sciences Educator at Bamfield Marine Sciences Centre on Vancouver Island, and was coordinator of the Let's Talk Science Program at UPEI. Currently, Hannah sits on the board of the Environmental Coalition of PEI.

Julia has worked with children in many different settings, but particularly loves being able to work and teach in the great outdoors. For her, there is nothing more gratifying than watching children develop a deeper understanding and love for the environment around them. She wants to make such experiences as inclusive and accessible as possible. Julia received her HBA from the University of Toronto in Environmental Studies and History.

Emily earned a graduate degree in Ecology Education at Lesley University in Cambridge, MA. She worked at an Audubon nature sanctuary, developing and leading nature based camp programming, as well as at an Outdoor Education Centre in Rhode Island, where she taught leadership, natural history, and survival skills, and coordinated a nature camp for kids. After a brief stint in Ottawa and Australia, she’s happy to be back in Nova Scotia with her husband and young son and involved with the Wild Child Forest School again. Jami came to Nova Scotia to fulfill her dreams of connecting with the ocean, the great outdoors and becoming a marine biologist. Now her BSc in Marine biology with a minor in business management degree at Dalhousie University is almost finished. She has been working and volunteering with kids for almost ten years. Whether it is coaching sports teams, teaching science camps, educating in the classroom or in the forest, she loves to share her passion and appreciation of the wilderness with curious young minds.