Our Journey Together to Canada’s New National Urban Parks Our local Sierra Club Canada team was honoured to be invited to Edmonton City Hall for the recent announcement by the Honourable Randy Boissonnault, Canada’s Minister of Tourism and MP for Edmonton Centre, on behalf of the Honourable Steven Guilbeault, Minister of Environment and Climate Change and Minister responsible for Parks Canada. Minister Boissonnault formally announced the beginning of the pre-feasibility phase for a new National Urban Park proposed in the greater Edmonton area.

Leaders Chief Tony Alexis of the Alexis Nakota Sioux Nation, representing the Confederacy of Treaty Six First Nations, President Audrey Poitras of the Métis Nation of Alberta, and Mayor Amarjeet Sohi of Edmonton joined the announcement on March 14. These partners are working together in negotiations leading toward establishment of the new park that will be further envisioned in coming steps.

Indigenous Peoples have a deep connection to the land so I am grateful for this development. Having a National Urban Park in Treaty 6 Territory would not only provide space for connecting to the Land, but would also provide opportunities for healing and cultural celebration for both Indigenous and non-Indigenous people. This is a step in the right direction towards Reconciliation.

The Métis Nation of Alberta is pleased to be involved in the early stages of Parks Canada’s National Urban Parks Program and looks forward to continued collaboration on this initiative. This program represents an important opportunity to develop green spaces that focus on preserving the natural habitats that exist around us all. An opportunity for growing partnerships with Canada, Alberta, and the City of Edmonton and for exploring new and innovative ways to protect, share, and appreciate the land and to celebrate the rich history, culture, and connection the Métis people have to the Edmonton area.

Edmontonians are united by our love of nature and getting outside. Being close to natural spaces increases wellbeing and connection. We are so lucky to have an incredible amount of green space across our city including the largest continuous area of urban parkland in the country. I am looking forward to partnering with Parks Canada, the Confederacy of Treaty Six First Nations, and the Métis Nation of Alberta to continue our long-standing stewardship of this land for all to enjoy.

Sierra Club Canada looks forward to collaborations with all partners and collaborators to make the dreams of a National Urban Park designation into reality for the Edmonton Metropolitan Region. This dream has been our focus and beacon of hope through the pandemic and going forward to recovery. A historic federal investment in the new generation of National Urban Parks in Canada, announced in August 2021, offers unparalleled opportunities for a legacy of conservation and enjoyment of parks for everyone. We strongly encourage a new National Urban Park to enhance biodiversity and land conservation, health and wellbeing, and inclusion connecting Canadians to nature as well as objectives for Indigenous Reconciliation. Building on work to date, we aspire to see investment in a park with intact ecosystems and a sense of place where the public can enjoy connections with Canada’s natural and cultural heritage in urban areas.

We are ready to continue our work in the consultation process moving toward the proposed designation as a National Urban Park. Canada’s first such park was Rouge National Urban Park (NUP), designated under Prime Minister Stephen Harper in 2011 along the Rouge River in the Toronto-Markham region, and it has been a popular success. Similarly, Edmonton Region has a beautiful river valley, wildlife, rich soils, farming, recreational trails, lively festivals, and diverse settlement and cultural heritage along the North Saskatchewan River and its watersheds. Areas such as the southwest and northeast reach of the river, for example, attract conservation attention among nature-lovers for their varied species and landscapes as well as big blue skies.

Edmonton’s Sierra Club has focused efforts for the last two decades on conserving the large contiguous area of riparian wetlands and nature at Woodbend to the city’s southwest limits between Big Island and the Sand Dunes Natural Area, possibly to Devon and beyond. Other opportunities include lands and wildlife habitat to the northeast toward Elk Island National Park. Certain sites offer potential to add more to the sum total landscape conservation at scale. Site selection will emerge through joint discussion and collaboration, also evolving through time as did the Rouge NUP.

We welcome the creation of the new generation of National Urban Parks across Canada. Entrance to these parks is free and inclusive, helping to reduce barriers accessing nature and green space in and near cities, right where most people in Canada live. The Edmonton Region and its love of parks and festivals can build on this new opportunity in its own ways.

A National Urban Park can offer outdoor play, environmental education, citizen science, food production, festivals, learning to camp, and nature outings. Already our Sierra Wild Child programs are right at home in parks on the North Saskatchewan River and its many creeks as well as the forests of Blue Mountain and Birch Cove Lakes near Halifax. New investment can add to jobs, learning, and public outreach in positive ways particularly for urbanites and youth, many of whom may not have traveled to distant national parks but can get to a national urban park near home.

A National Urban Park puts nature within reach locally, even as it draws in new tourism and business ventures such as prospects for Indigenous tourism highlighted by Minister Boissonnault. More excitement is also growing with local efforts leading to the nomination of the North Saskatchewan River for designation as a Canadian Heritage River. Further, urban parks can mitigate crises such as flooding, precisely the reason Edmonton originally declared its river valley as public park space that has endowed our public benefit a century later much as we can envision currently with a National Urban Park for the next century and our grandchildren. As the pandemic and climate change reveal, our public parks are not only a valuable nature retreat and much needed to serve everyone’s health and wellness but also serve as green lungs of our cities and towns.

Bringing together and expanding green spaces – various kinds of parks and protected areas – over time can create a larger mosaic of landscape conservation at scale and healthy recreation success stories as seen in the case of the Rouge NUP and its settings. The Rouge lands are owned and operated by Parks Canada, but the next generation National Urban Parks will explore new governance models and collaborative agreements customized to each new park. In the Edmonton Region, this might mean multiple agreements with existing authorities backed by new federal funding and collaborations are one possibility, among many, to discuss in pre-feasibility work to forge an innovative solution for the first National Urban Park in Alberta. Stay tuned for more as park policy emerges through consultation.

Across the country, leaders are exploring Parks Canada’s new program and nationwide network with possibilities for new National Urban Park designations in Edmonton, Saskatoon, Winnipeg, Colwood, Windsor, Montreal, and Halifax by 2026. Indigenous partners and others are crucial to advancing these initiatives. Sierra Club members can join the conversation and many volunteer opportunities to support parks and nature-loving cities where they live.

Sierra Club in the news: 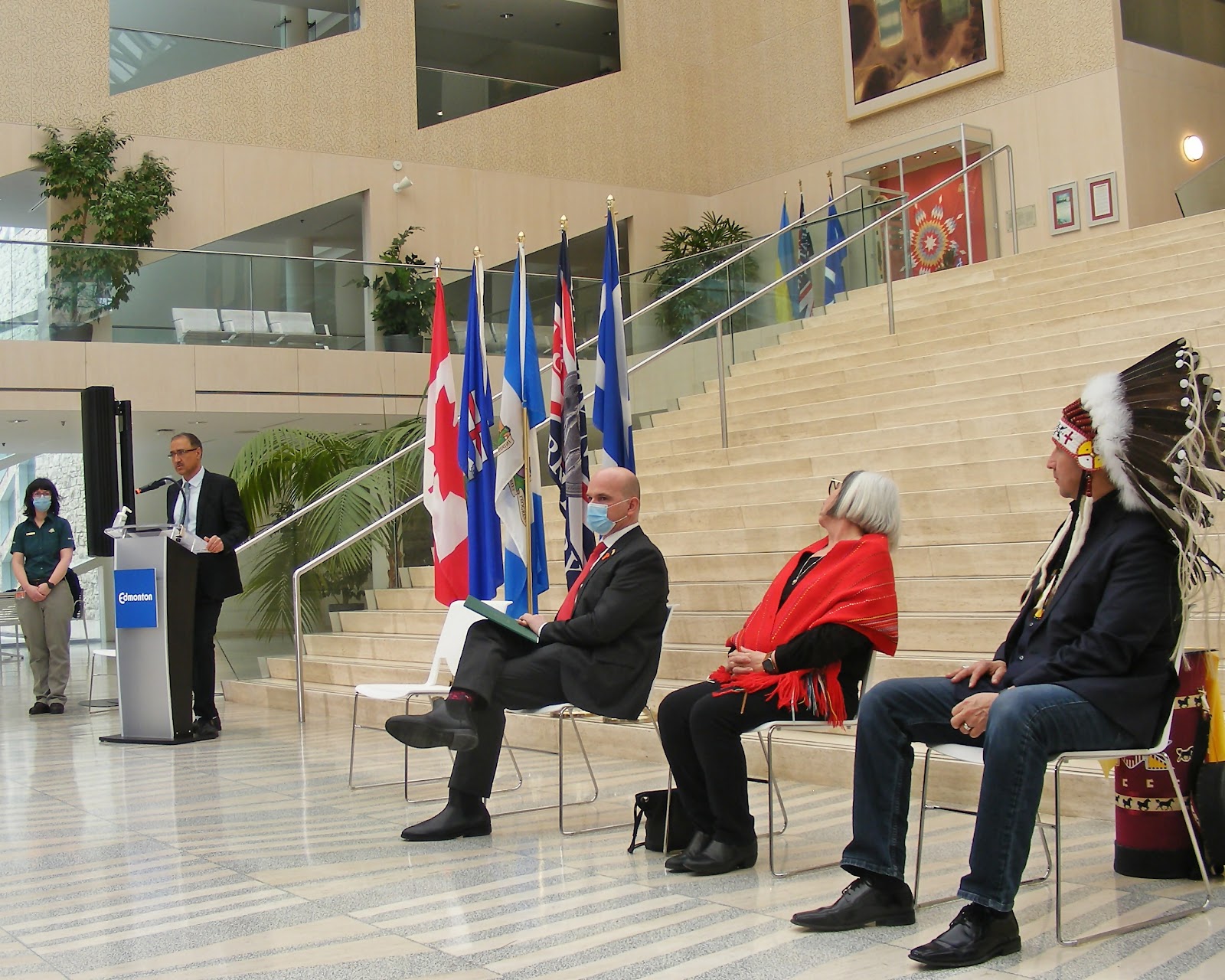 Our Sierra Club team at City Hall after the announcement with Lindsay Bouchier, PearlAnn Reichwein, and Charlie Richmond.