The explosion of the movement for racial equality recently brings into highlight a threatened old growth forest called Waverly Beach, in Fort Erie, Ontario. Its sacred groves in 1905, earlier a home for refugees from slavery, became the birth place of the Niagara Movement. It was a forerunner of the National Association for the Advancement of Coloured People (NAACP).

Fort Erie, where Lake Erie begins to flow into the Niagara River, is an awesome place. It is called Waverly Beach. Here, ruins of an abandoned century-old amusement park mix with great beauty into a landscape dominated by towering old growth trees.

What is astonishing about the great trees of Waverly Beach is their diversity. Despite the fact that they come from a great variety of places in the world, they still manage to get along and create an ecosystem that is a treasure trove of Endangered native species. One rare tree only recently discovered to have a Canadian population is the Shumard oak. It towers above concrete ruins of an abandoned playground.

Other native old growth giants in Waverly Beach are sugar maples, black cherry (rare as an old growth tree since its wood is so valuable), black walnut, black oak and catalpa. These aged giants, together with dead trees known as snags, create the conditions of an old growth forest. The snags and dead-fall here create the conditions needed to provide habitat for the Endangered red headed woodpecker. It has vanished from much of its former habitat since poor forest management frequently removes the snags and aged trees the magnificent red, white and black bird needs to survive. 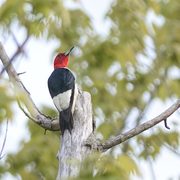 Astonishingly, the old growth forest which provides habitat for the Endangered red headed woodpecker, also has giant trees of exotic species. In the Waverly Beach forest along with the towering oaks, they are surprisingly harmoniously blended in giant Norway maples and trees of heaven (an imported tree from China). The magnificent mix of trees along the shores of Lake Erie makes the woodland a haven annually for 182 species of birds that pass through here on migration. Monarch butterflies also assemble here before they cross over Lake Erie.

The area near the shore is habitat for an endangered auran, the Fowler’s toad. It lives in Canada only in precious few habitable sites along the shore of Lake Erie.

The old growth part of the Waverly Beach forest is on four hectares along the Lake Erie shore, on both sides of the now closed “Friendship Trail.” A fifth of this tiny area is threatened by a proposed road extension of Lakeshore Avenue intended to service some future coffee shop. Since 1930, the forest has grown by 11 hectares providing habitat for two bird species that require large habitat blocks. These are the wood thrush and the Eastern wood pewee. A water treatment pond here provides habitat for a spectacular bird, the great egret, which a century ago was threatened by hunters seeking its showy white feathers.

At the same time that pioneer environmentalists were campaigning to rescue the great egret, Waverly Beach became a place of refuge for those battling for human rights on our continent. It was at the time, a popular “amusement park” which served as a healing refuge.

From July 11 to July 14, 1905, a compelling healing gathering took place that was organized by W. E. Du Bois, the continent’s foremost advocate of human rights, when horrific lynchings and Black voter suppression were the norm. His first book, "The Philadelphia Negro", deplored the horribly crowded treeless conditions of the inner city Black ghetto.

Du Bois would come to resemble the giant trees that shaded his conference, living like them to a ripe and towering old age. He would be one of the continent’s foremost intellectuals; his death at the age of 95 in 1963. He died the day before Martin Luther King, Jr. would give his great “I Have A Dream” speech in Washington. Soon too would one of the measures advocated in Waverly Beach for federal supervision of elections be signed into law by U.S. President, Lyndon Johnson.

Du Bois had originally planned to launch his human rights campaign (originally called the Niagara Movement, whose name was later changed to the National Association for the Advancement of Coloured Peoples, NAACP), in Buffalo. However, the dirt and grime of an industrial city he realized on reflection, was not an appropriate place for good minds to gather. He decided, initially at his own expense (he was later refunded by his 28 friends), the Erie Beach Hotel.

Du Bois realized that he needed “a quiet place outside the city near the water”. Here, his friends “can be ourselves, hold conferences together and at the same time have bathing, croquet and fishing for recreation.” In such a calm and scenic place, Du Bois understood “no liquors are needed.” He understood that the Niagara River, which begins here, was a “mighty current” similar to the surge he wished to unleash against disenfranchisement, denial of education and the widespread use of convict labour.

The birth of the NAACP in Waverly Beach is an eloquent testimony of how the beauty of nature can inspire good minds to action and foster healing. It is to be hoped that this message will be accepted by the Ontario Municipal Board (OMB) when it hears an appeal to it launched by a Niagara naturalist, Marcie Jacklin. For more information visit the website of Community Voices of Fort Erie.

Photo credit: Landscape of a trail through some of the old growth, Winter 2018 & Red-headed Woodpecker in a tree in Waverly Beach Park, 2019 taken by Ron Goodridge.

The Great Lakes hold 1/5th of the world’s fresh surface water and currently provide drinking water to over 42 million...
END_OF_DOCUMENT_TOKEN_TO_BE_REPLACED
Tweets by SierraClubON